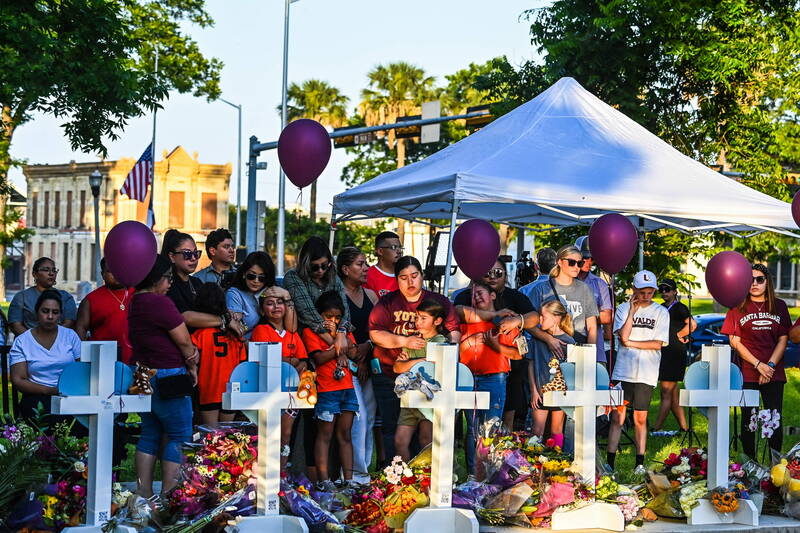 Supporters of gun rights keep invoking a passage written in 1791, a time when muskets, the firearms in question, were less deadly than those circulating today.

To arms, citizens! Form your battalions! March, march! May pure and innocent blood flow through our streets, schools and churches!

That could and should be the anthem of the most powerful lobby in the United States — the National Rifle Association. No Republican can imagine winning an election without this lobby’s support. Every candidate and elected official has an A+ to F grade from the NRA. If the grade falls below an “A,” it is difficult if not impossible to get elected, because the lobby and its 5 million members are present in each state and in each state legislature. Its desire is insatiable: Arm as many citizens as possible so they can protect themselves from imaginary enemies.

Easy access to firearms is part of American culture. Today, that culture is anchored in a debatable reading of the Second Amendment, which provides: “A well regulated Militia, being necessary to the security of a free State, the right of the people to keep and bear Arms, shall not be infringed.” Who are the armed citizens in the United States today? About 81 million people own 393 million firearms. To a more limited extent, members of the National Guard also own firearms. What weapons are we talking about? In the 18th century, at the time the Second Amendment was written (1791), available weapons consisted of muskets that constantly had to be reloaded by hand after cleaning the gun barrel and adding a new charge of powder. In one hour, a skilled shooter could, in a pinch, shoot three or four people, certainly not 20, 30 or 50. Weapons meant for war, semi-automatic assault rifles with large cartridge clips, did not exist in colonial times. These recent inventions, a product of modern warfare, are now available to American consumers with minimal restrictions, particularly in states like Texas: where there is a quick ID check (to verify age and criminal record), no requirement for a gun license, no limit on the amount of ammunition one can buy, no restriction on having these weapons at home or in the street (except if the gun concealed), and no questions are asked about the buyer’s mental health (except if the buyer has been diagnosed with an officially recognized psychiatric illness, which is difficult to prove).

The Supreme Court has encouraged Second Amendment fetishism — do not mess with my constitutional right to bear arms — ever since its decision in District of Columbia v. Heller (2008). The decision is based on a highly questionable reading of the amendment that completely distinguishes the right to bear arms from participation in a militia. The court sided with the plaintiff, Heller, who wanted to keep a gun in his home for personal protection without restrictions on its use, which was against the law in the District of Columbia. This decision, written by Antonin Scalia, one of the court’s most conservative justices, froze debate on the real or supposed reach of the Second Amendment. But it has not stopped some states from restricting or banning certain weapons.

The response to the countless massacres of schoolchildren is quite simple — ban the open sale of military-style weapons with large magazines. A pistol that holds six bullets or a hunting rifle should suffice when it comes to protecting yourself against theoretical bandits. Limiting the sale of weapons, assault rifles in particular, would certainly be a blow to weapons manufacturers and the NRA, their very powerful lobby. That is certainly why such limits are so rare. They exist in California, New York and other states under Democratic control. But elected officials consistently block them in conservative states. The best way to hide the proposed solution is to never mention that it exists. Here is Texas Gov. Greg Abbott’s televised response to the massacre of elementary school students in Uvalde: Abbott delivers his condolences, offers prayers and denounces the criminal actions of “a demented person.” He commends the good job done by the police (who, sadly, intervened a little too late), complains about the lack of psychiatric hospitals in the area, regrets that Facebook did not react sooner to some concerning posts, deplores the fact that the school has too many doors — a security threat — and, finally, he announces that there will be a period of reflection to think about beefing up school security (read: more weapons, guards, police officers, and surveillance).

But there is not one word about the obvious: stopping the open sale of the most dangerous weapons. Adding insult to his ignorance, the governor mentions cities like New York and Chicago, which have successfully implemented measures against firearm sales. Crime in those cities, he claims, has risen higher than in Texas. But he is confusing schools, which have not had experienced recent shootings in those cities, with armed gangs, which certainly wreak havoc among themselves, but do so without wiping out dozens of children. As they are wont to do, NRA supporters accuse their adversaries of politicizing tragic events for personal benefit. In the eyes of NRA supporters, and according to the catechism of the omnipresent lobby, the only way to stop a madman with a gun is an upstanding citizen with a gun, as NPR senior editor and Washington correspondent Ron Elving wrote on Oct. 10, 2017 in “The NRA Wasn’t Always Against Gun Restrictions.”

According to a tweet from Republican Rep. Paul Gosar of Arizona (which has since been removed), the person responsible for the Uvalde shooting was a “transsexual leftist illegal alien.” Others, according to Fox News, say the parents were responsible! They should have sent their children to private schools, which cost more and are better protected. There is no limit to conspiracy theories in the United States.